Hurray! Scarlett did become Queen of the Jungle. 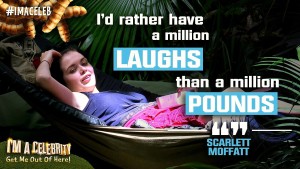 Though everybody was brilliant; good old Larry Lamb like a dad and Carol Vorderman, we all know what Carol’s good at.  Adam’s brave – us dogs totally understood those noises he was making, Joel is a kind, generous spirit, Scarlett is funny and has some interesting and straightforward theories about life too. 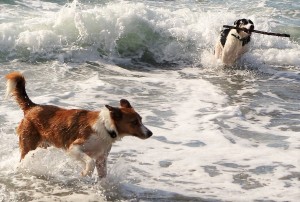 Celebrity Cyclone – was amazing –  think me and Buster could do that, we’re good at battling the waves. Though maybe we’d have had the same struggles as Scarlett to hang onto to all four giant stars at the start – that was tricky. 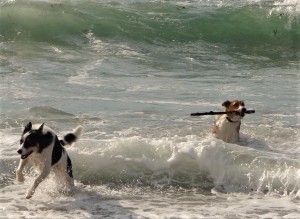 Scarlett said she didn’t feel like a celebrity as, she was just known for being on television watching television…. what’s all that about?  It’s a programme called ‘Gogglebox’.

I loved the programme about Kate Humbles dog Teg, a Border Collie. Mum let me watch it quite a few times. All I could think was “isn’t Teg like me” – we could do a “Who Do You Think You Are” for us dogs and Teg and I would find out if we’re family.

Lots of us watch animals and  scientists have found out we love high pitched sounds and watching other dogs – hmm not too surprising.

Back to old Scarlett; she’s one of a kind – which we all are really aren’t we – though when she was very young she felt a bit different to everyone else and didn’t fit in or make fiends easily. She felt she couldn’t be herself and should be one of the crowd.

You can be one of the crowd but, it’s much better to be yourself – not all of us fiends chase cats or like being patted on the head by strangers!!

‘I’m A Celebrity’ was Scarlett’s favourite programme when she was growing up and Scarlett said one of the other reasons she went on it was; “………I feel that if I won I would be showing my little sister that it doesn’t matter, you can just be you”.

She did win and proved; you can just be yourself and that’s absolutely great!

Until next time fiends.